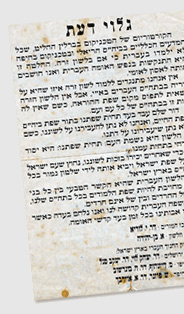 The Hebrew Reali School in Haifa, Israel, was founded prior to the beginning of World War I. It was then decided that all exact sciences would be taught in German. This decision prompted a grave dispute, especially in Haifa. An assembly protesting against this decision was held in November 1913, in which the dispute was resolved by ordering the immediate foundation of a Hebrew Reali School.

The Zionist operational committee supported this initiative. Dr. Arthur Biram was appointed the schools first principal. The school was inaugurated in Hanukah (December) 1913. A few months later, World War I broke out and Dr. Biram was drafted by the German army and stationed in Afula (not far from Haifa). Joseph Azariah then replaced Dr. Biram as principal.

In 1919 Dr. Biram returned to school and began implementing his conceptions. He began shaping the schools image as a “productive school”: ten grades in which the craft-related subjects were given one third of the total teaching hours. In the realm of education, special emphasis was put on discipline and Mitzvahs. The scout groups “HaMeshotetim” (“The Vagabonds”) and “MeShotetey BaCarmel (“Carmel Vagabonds”) were founded by science teacher Pinhas Cohen and Arieh Kroch, respectively. In 1923 the school moved to a building in the old Technion campus, which had served until then as a British military hospital.

The year 1924 was a milestone, for it was one of the schools turning points:

During this period, the schools motto was also determined: “Walk Humbly” (Micha, 6:8). This motto expresses the schools aspirations in the realm of education. Between 1932 and 1939, much due to the immense immigration and the rapid development of Haifa, the number of students attending the Reali reached 1147 in 34 classes. New branches were opened in the Carmel center and in Ahuza. In 1938 the school adopted the concept of a uniform. In light of the 1938 violence in Hebron, the school introduced a mandatory course in self-defense and classes in “applied sports”, the predecessor of the “Gadna” program.

The school experienced many hardships during the years 1940-1948. These were the years of World War II and the struggle for independence. Much of the schools staff, as well as some of its students were drafted. Studies were held in shifts, seniors were drafted to a “one year service” and received their diplomas only after completing this duty.

In 1948, with the establishment of the State of Israel, the school underwent some changes:

At the end of 1955, Joseph Bentowich resigned. Isaac Shapira was then assigned principal and served in this post until 1983. During this period, new buildings were erected on the Beit Biram campus, progressive tuition was introduced, the schools structure was reformed to six elementary grades and six high-school grades and new educational programs were offered. In 1983 Isaiah Tadmor, a Reali graduate, was appointed principal while Mr. Shapira was appointed president of the school. During this period, new projects were introduced, such as:

Upon completing 13 years as principal, Isaiah Tadmor resigned. Ron Kitrey, a graduate of both the Reali and the military academy was appointed principal. Meanwhile, the school’s senior management was reduced to two vice principals: one in charge of financial affairs and the other in charge of pedagogic affairs. New emphasis was then put on the following issues:

At the administrative level, the school began operating in compliance with an annual program and an annual budget while decentralizing authority and turning responsibilities over to the principals of the branches. A radical change that occurred recently was the transforming of the two branches in the Carmel center to an experimental school – a 9 year educational program for science, nature and environment. This is the first experiment, with others to follow, in an attempt to establish a unique concept for each of the schools branches.

During the past 7 years, the school has  invested immensely in both renovation and addition of various school facilities, including school classes, gymnasiums, labs and yards, upgrading computer systems and much more for the benefit of students and staff. School management is dedicated to continue improving school facilities in the future. In June 2000, after serving as principal for over 4 years, Ron Kitrey was called upon by Chief of Staff of the Israeli Defense Force to assume the position of the IDF spokesperson. After completing his service as IDF spokesperson, Ron Kitrey resumed his post as School Principal in June 2002.

On December 2003 the School celebrated its 90th anniversary. As part of the preparation for the 100th anniversary, the school revised its vision as such:

“To be a leading and path breaking top quality educational institution, which encourages its pupils to be “mensches”-worthy human beings- actively involved in Israeli society”.

As always, our school is committed to lead in the educational process, by promoting learning strategies and skills, designing future leaders and nurturing humane and social values in our students.In addition to preserving traditional values, we continue to invest in the development of academic contexts, advanced technologies and educational environments in a cooperative atmosphere. Today, at the age of 100, about 4,000 students attend the Hebrew Reali School in 129 homeroom classes, ranging from kindergarten to 12th grade. Over 400 seniors graduate our school every year. Our academic and administrative staff consists of 500 members. More than 21,000 alumni bring a humble honor to the school. Among them one can find hundreds of key figures in Israeli society, including one former Israeli President, three Supreme-Court judges, four Chiefs of General Staff of the IDF and many professionals in various fields.